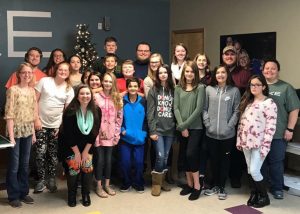 Renee Wilbanks’s first encounter with YOKE was as a student at Northwest Middle School in the late 1980’s.

“We had a very large club, and our leaders made sure to do something with the kids outside of club every week,” recalled Renee. “They went to basketball games, helped at school dances, had movie nights, took us camping and hiking, and just spent so much time with us. Our leaders were always such good role models. They were willing to do anything to make club or camp fun, and to show us why Jesus was important in their lives.”

Because of the impact that Renee’s YOKE folk had on her life during middle school, she later decided to follow in their footsteps and serve with YOKE herself. She was a YOKE Folk at Northwest while studying at the University of Tennessee and enjoyed serving kids through the program that had meant so much to her. After Renee’s years as a YOKE Folk, she continued to support the organization and years later was excited to see her own kids get involved with YOKE at Powell Middle School.

Two of Renee’s children, Sarah and Chris also went on to become YOKE Folk at Powell. “As a parent, I was so excited to see my kids attend YOKE in middle school, but I was even more pleased to see them become YOKE Folk themselves,” explained Renee. I loved watching them help lead the club at Powell, and that experience gave me yet another perspective on YOKE and how it impacts not only the kids, but the leaders as well.”

“Since I was a YOKE kid, I knew the impact that YOKE can have on students,” said Renee’s daughter Sarah. “It was a great way for me to meet Christian role models and make new friends. In fact, one of my best friends from when I was a YOKE kid served at Halls and Northwest last year.”

The Wilbanks family has continued to be involved with YOKE over the years in various ways. “Whether it’s having the kids over to our house to decorate Christmas cookies or hosting the Powell club for a family dinner, I have loved being a part of YOKE for so many years now,” said Renee.

“Serving with YOKE is a great way to have an impact on a kid’s life,” said Sarah. “It’s also a great way to become a part of a family of people who share the same faith and desire to serve their community. You never know the impact that you might be having on a middle school student’s life just by showing up for them.”

Sarah is a student at UT and continues to serve at Powell. Chris now works with the Knoxville Fire Department. You can impact your local middle school just like the Wilbanks family has. If you’d like to join the YOKE family and serve your community by investing in students, we want to hear from you. Fill out our online application, or contact program director Eli Cockrum at eli@yokeyouth.com with any questions. Renee with the Northwest Club at Camp in 1990