Greenback Community Comes Together to Launch a New YOKE Club 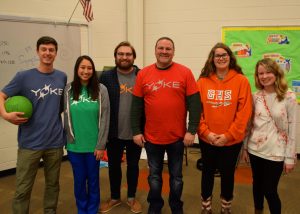 YOKE is excited to launch a brand new club this semester at Greenback Public School. Greenback is a K-12th grade school, and the Greenback YOKE club for 6th-8th grade students is YOKE’s first in Loudon County. The club held its first meeting on January 14th.

In the fall of 2019, Keith Ross, former pastor and a member of the Greenback community, approached YOKE about the possibility of starting a YOKE club at Greenback. At the time, there were still many YOKE teams in need of more volunteers, but Keith believed he could put together a team of young adults who were passionate about mentoring students at Greenback. By the time the spring semester arrived, the team was assembled and ready to get started.

“I recently watched the movie Woodlawn, which is about a sports chaplain for a high school football team,” recalled Keith when asked what motivated him to start YOKE at Greenback. “I too served as a football chaplain at Greenback, but that was more than ten years ago. I realized I wanted to give back to the school I’d graduated from in a way that would impact not only the school, but the entire community.”

Keith says that the first club at Greenback served as confirmation that God had brought him to YOKE for a reason, and he believes the opportunity to lead this team is an answer to his prayers. The team is already connecting with middle school students and planning ways to impact students beyond club.

The Greenback YOKE Club meets on Thursday nights from 7pm – 8pm in the music room. YOKE is still looking for several young adult leaders to serve as mentors to 6th-8th grade students at Greenback School. If you or someone you know might be interested in serving on the Greenback team contact eli.smith@yokeyouth.com or call the YOKE office at 865-522-6907.