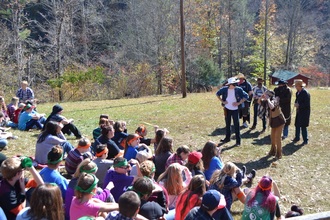 YOKE camp, held over the course of two weekends each semester, is always a highlight of the year for both our students and YOKE Folk. Each camp has a theme, so every experience is different. This fall’s theme was Western Camp, so the games, skits and activities were woven into the story of the Lone Ranger pursuing Black Bart and his gang of outlaws.

Nearly 300 students participated in Western Camp this November, an increase of more than 50% from spring camp. Our clubs at Farragut Middle and Bearden Middle, two schools where we did not have clubs last year, sent 13 students and 12 students respectively and several others saw significant increases in attendance including Coulter Grove Intermediate in Blount County (700%), Jefferson Middle in Jefferson County (1200%) and Vine Middle in Knox County (1500%).

Ciara, a student at Vine, one of Knoxville’s urban schools, who attended her first YOKE camp said it would be difficult to pick her favorite thing about camp, since she liked it all. When pressed though, she decided it would have to be the new friendships she made. As it turns out, she had exchanged numbers with two new friends from Rutledge Middle School. Her story left us wondering where else but YOKE camp might students from Vine have the chance to forge relationships with students from Rutledge.

We are grateful to all who gave to help make camp possible. Special thanks to PetSafe for a $2,500 grant to assist with camp scholarships. If you’d like to help with camp, there is still time. Send a check with “camp” in the memo line to YOKE at P.O. Box 3492, Knoxville, TN, 37927. Or make a gift online anytime.

For all the pictures from Western Camp, visit YOKE’s Facebook Page.