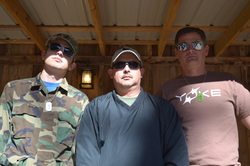 
As YOKE’s Executive Director knows well, God can capture a person’s heart for YOKE and keep them involved much longer than originally anticipated! As Chris says, “There have been very few weeks since my college days that YOKE hasn’t been prayed for, discussed, or on my calendar.”

And with good reason! Chris isn’t just our fearless leader, he is a YOKE Folk alumnus. Chris served on the second ever YOKE team at Northwest Middle beginning in 1978. As part of a team out of West Haven Baptist Church, Chris learned the guitar and returned to his middle school alma mater just so he could impact kids for Christ. Since then he has served as a Team Leader, camp program director and speaker, and member of the Board of Directors and Advisory Board.

Chris’ family has also been involved in YOKE, serving as YOKE Folk and Team Leaders, too. His oldest daughter Alicia even stormed a YOKE stage at a big event when she was four years old to “save” her daddy from being beat up in a skit! (She’s forgiven us and has served at several schools in her adult life.)

Before coming on staff at YOKE, Chris worked probably every job imaginable. He’s worked outside the church in the business world, and he’s worked inside the church as a youth pastor and head pastor. He’s even a former florist, so don’t try to do a messy decorating job – he’ll know!

Joining the YOKE staff was definitely a God-centered decision for Chris. He had been asked more than once by the current board chairman, John Harris, to accept the Executive Director position. Chris finally prayed for a sign while travelling in South Carolina. And what should he see at the next rest stop? A middle school student wearing a brightly colored YOKE shirt. Because of that student, Chris’ closet is now more than half full of those same YOKE shirts.

“Stay close to Jesus. Stay in His Word. Be yourself. Be a giver. Be an encourager,” Chris said about what he’s learned from years of ministry in churches, as a layperson, and in YOKE. “Have fun and enjoy the ride.”