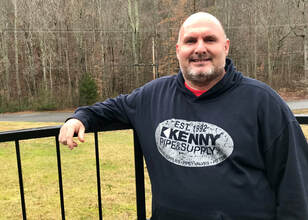 Scott Sutton attended YOKE at Gresham Middle School as an eighth grader in 1984. He remembers his time in YOKE fondly, but his involvement with the program ended after his time in middle school—until last fall.

Scott only recently became a follower of Jesus. Scott’s newfound faith helped sustain him through a difficult period and he found himself looking for opportunities to give back. Having originally gone to school with the hope of becoming a coach or a teacher someday, Scott always had a passion for serving kids. Even though his career took a different path (he now works for a commercial plumbing wholesaler), he put a lot of that energy into coaching his son’s sports teams as he grew up.

About five years ago, Scott ran into one of his former YOKE Folk at the dentist’s office. As he chatted with her, he remembered the impact YOKE had on his life. As he was considering a place to serve, this interaction came to mind.

Scott learned that Eric and Ara Langford, two of his closest friends in high school, are now YOKE Team Leaders at Karns. He called Eric to share his story and mentioned that he was interested in serving with YOKE.

“After I spoke with Eric, I got plugged in with YOKE quickly,” said Scott. “It felt as if God had opened this door for me at the perfect time, so I wanted to step through it immediately.”

After seeing the opportunity that God had provided for him through YOKE, Scott was faced with the decision of where to serve. Gresham was where he attended, but Vine was closer to home. He considered Karns, because of his friendship with Eric, but ultimately landed at Carter, which is where his children had attended.

“At first I was a little hesitant to serve at Carter,” Scott admitted. “It was a source of pain for me, knowing that I had not been a godly father to my kids when they were there. But I had been around the Carter community enough to know that it needed the love that YOKE provides, and I felt God leading me to set aside my own discomfort to serve these kids.”

At YOKE Camp last fall, Scott realized that, through YOKE, he had an opportunity to impact the lives of the YOKE Folk as well as the middle school students. Having started with YOKE later in life than many of our leaders do, he has also enjoyed being able to invest in the college-age YOKE Folk on his team.

“I love the opportunity that YOKE gives me to work with kids, because I feel like I’m a big kid at heart,” said Scott. “But I’m starting to realize that God has me here to minister to the younger YOKE Folk just as much as the kids. If I’m able to help one YOKE Folk and one middle school kid, then I think it’s all worth it.”
​
Though most of our YOKE Folk are college age, it’s never too late to have an impact. For more information about how you can be involved,  contact program director Eli Cockrum at eli@yokeyouth.com or fill out our online application and someone will follow up with you soon.