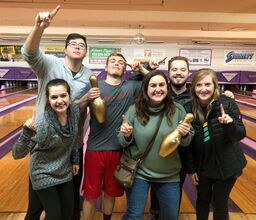 YOKE places a high value on leadership development. That means more to us than simply training volunteers to “do club” better. That’s part of it, but we also aim to equip young leaders for a lifetime of service, wherever God may lead them. We want our YOKE Folk to be better employees, better neighbors, better church members, and better parents because of their time with YOKE. The annual Leadership Summit is a big part of that effort.

YOKE Folk and staff got away for three days recently at Carson Springs Conference Center in Newport, TN. We planned the event with three goals in mind: to be refreshed, to build community, and to be equipped for service. Though most of us needed a nap when it was over, it’s safe to say that all three goals were accomplished.

Kevin DuBose, an area director for Emerald Youth, was our guest speaker for the weekend. He taught about a leadership perspective, practice, and purpose from Luke 24. Cynthia Lynn from the Tennessee Suicide Prevention Network provided valuable training on recognizing signs and helping to prevent suicide. In addition, YOKE staff provided training on how to nurture your relationship with God and stressed the importance of Kid Time – that time spent with kids outside of club. Thanks also to T.C. and Danielle Chambers of Concord West Hills for helping lead worship.

There was plenty of free time, too, and YOKE Folk from all five counties took advantage of the time to catch up. One of the highlights, though, was the Inaugural YOKE Bowling Tournament. We rented out Victory Lanes in Newport for the special late-night event. Congratulations to Kyle Holland (Halls), who took home the trophy for the high score. The Halls team also took honors for the best overall team score.
​
“One of the things that I learned this weekend is that Christian leadership is letting our light shine in the midst of the darkness,” said Chastedy Johnson. “Our little light has a huge impact on ushering people into God’s presence.”