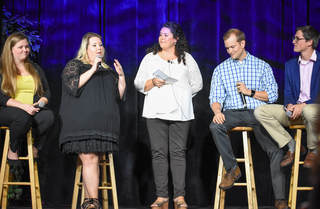 More than 600 guests joined us for the 2017 YOKE banquet, as we celebrated 40 years of ministry in East Tennessee. The event, presented for the first time by Pilot Flying J, was held at the Knoxville Marriott on Tuesday, August 29. The event raised $167,000 for YOKE’s ministry in Knox, Blount, Anderson, Jefferson, and Grainger Counties.

The program celebrated YOKE’s legacy of discipleship through the years, featuring several stories of YOKE kids who grew up to become YOKE Folk and are now having an impact on a third (and in some cases a fourth) generation of YOKE kids.

The main portion of the program featured the stories of Jeff Bronner and Brianna McTeer. Jeff was a YOKE kid at Northwest Middle and now serves there as a YOKE team leader. Brianna was a part of YOKE at Whittle Springs Middle and now serves there as a YOKE team leader. (Check out their stories on our YouTube channel.) Both were joined on stage by the YOKE Folk who had a particular impact on their lives, Chad Daugherty and Brittney (Whittle) Ogle. Chad’s ministry with YOKE ultimately led him to change his major in college, and he now serves as a middle school pastor in Lakeland, Florida. Brittney is a school teacher at Freedom Academy in Knoxville. Finally, the four were joined on stage by Timothy and Elizabeth, two of our current YOKE kids that Jeff and Brianna have special relationships with. Seeing the impact that Chad and Brittney have had on these two students whom they had never actually met was an inspiring example of Paul’s words in 2 Timothy 2:2.
​
YOKE also introduced a new video with the organization’s past and current executive directors discussing the importance of a legacy. Legacy is one of those words with multiple meanings. It can mean the legacy that you inherit from those who’ve gone before, or the legacy that you leave behind for those who come after. Both are crucial to the mission that God has called us to. Thank you for investing in YOKE’s ministry today, and for helping to write that legacy for future generations.