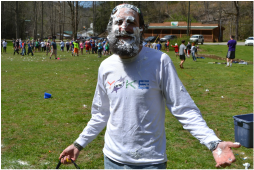 For the last two and a half years I’ve had the incredible privilege of working with one of the most amazing ministries in East Tennessee. When I began volunteering with YOKE as a student at Johnson University (actually it was still Johnson Bible College), I signed up for the same reason that many do – to get those ministry hours completed! But I was blessed with a passionate team leader who infectiously demonstrated the purpose of YOKE and I was hooked before the end of my first semester. Several years later that wonderful team leader would become my boss as I took a part time position coordinating four Knox County middle schools.

Since then I have learned a lot about myself and even more about ministry to students. Here’s the thing, the more I worked with students the more I wanted to be with them! From early on in my college experience at Johnson, teaching entered my mind as a potential career. So the more I wanted to be with students the more teaching seemed like the right thing. In the spring of last year, I decided to pursue a career in education, and YOKE has been nothing but supportive. The love for educators at YOKE is astounding, and their support of me in this venture has been absolutely crucial in my journey. So in the fall last year I returned to school at the University of Tennessee as a full time student while continuing part time at YOKE. It was difficult for sure, but the staff at YOKE was so supportive and encouraging, picking up my slack and helping me out at the drop of a hat.

Last spring I was accepted into the College of Education at UT and began classes in the program earlier this fall. In preparation for this, I decided at the beginning of the summer to step down as urban coordinator at YOKE. I was thankful to be able to work through the summer and had so much fun with the staff and volunteers pulling off the Summer Adventure trips, but now that classes have started it is time to move on. The thing I will miss most about working with YOKE is something I’ll never actually lose, and that is the relationships I’ve made here. The YOKE family is made up of some of my favorite people, from our students to our future folk, our volunteers and of course this amazing and passionate staff. It is a network that I am thrilled to be a part of.

I have to say thank you to Cindy, Eli, Stephanie and Leah whom I have worked with consistently over the past two and half years. These people have been nonstop supportive and have become family. I must also give a special thanks to Eli for indirectly introducing me to my fiancee, Shelby, a former YOKE Folk in Blount County who happens to sing a great silly song! I must also thank Chris Edmonds who, as executive director when I made the decision to return to school, was so supportive and encouraging in this venture. I can’t imagine a better boss who encouraged me to pursue this calling, even if it meant more work for him and his staff. And I’m so glad for the brief opportunity to work with Brandin-Lea and Jonathan who give me faith that YOKE is in a great place. These two have also been incredibly generous and flexible with my schedule, frequently covering clubs and interviews for me. I can’t say thank you enough to dozens of YOKE Folk who so wonderfully lead the clubs under my coordination. They were all so faithful to the ministry and made my job such a pleasure! Thank you, all!​

Quite simply, I wouldn’t be anywhere near where I am today if it weren’t for YOKE.