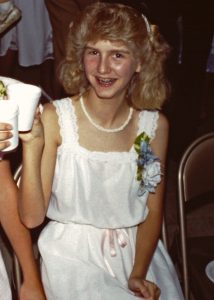 My YOKE story begins in the early ‘90s. You remember the days of tight rolled jeans, slightly big hair (although maybe not as big as high school), and Bass Buck shoes. I was a sophomore at UT and practically lived at the BSU (that’s BCM for you current students). Between TNT, Nerd Ball, intramurals, and Soul Food Café, all my friends were doing YOKE.  Seriously, there were so many students serving in YOKE that the B was totally empty on Tuesday nights. I liked kids and I loved camp so I knew YOKE was something I could do. I signed up, interviewed with John Coatney, and was assigned to Karns Middle School in 1991.

I was a YOKE Folk for the next couple of years. For me, this was way outside my comfort zone. Though most of my friends were also YOKE Folk, they were all at other schools. At first, I was disappointed to be on a team where I knew no one and I thought about asking to change clubs. I stuck with it, though and quickly got to know my new team and forged friendships with them. Since I didn’t have a car, I also had to rely on them to get me to club, team meetings, and Kid Time. That was humbling for an independent person like me. Those two years I learned to ask for help and also to accept it.

I made so many fun memories as a YOKE Folk at Karns! I found myself in countless crazy skits, leading silly songs and worship music, giving my first talks (I was SO nervous), and getting to know kids so we could do Kid Time. Like now, camp was always a highlight. I had grown up attending Camp BaYoCa  and worked there during college as the Program Director, so getting to take a whole new group of kids to camp was right up my alley!

YOKE Camp was different than summer camp, though and a major reason was the infamous mud slide!  For kids and YOKE Folk who weren’t around YOKE in the 90’s, picture the hill at the dining hall, with mud hauled in and watered down, hay bales lining the edges, and a huge pit of mud at the bottom. We would slip and slide all afternoon! People were completely unrecognizable when they came up out of the mud! I remember the screams and laughter from kids and leaders those afternoons. Jesus was amid the mud and laughter and it was awesome.

I also remember the Rocker-thon. We would get friends and family to sponsor us while we rocked in rocking chairs for hours. Leaders helped round up rocking chairs from homes, churches, even Cracker Barrel. Kids and leaders spent the whole day rocking, hanging out, singing club songs, and raising money to support YOKE. One year there was even a giant rocking horse, which, of course, I chose for myself.

After earning my degree, I worked for nearly 20 years in the mental health and adoption fields. I loved being able to use my education to serve Christ by helping those in need or by connecting kids to families. Many times over the years I was able to use the skills I learned at Camp and with YOKE. You wouldn’t believe how many times a club game or song helped calm a situation or enabled me to connect with a client who refused to talk to me.

Then one day, the Lord changed my career path. My job was cut to part time, so I needed to find a new position, and God led me back to YOKE. In February of 2012 I began working at YOKE full time as a staff member. Only God could have known that, what he began in 1991 would circle back around and be part of my life again. Working on staff has been a blast. I love getting to know our YOKE Folk, meeting new leaders and connecting them to the middle schools we serve. I love getting to plan and work camps every spring and fall.  (Although I don’t bounce back from the lack of sleep like I did in my 20’s!) The relationships God has brought through clubs, camps, churches, and schools are amazing. He is moving in our city and I love being a part of that.

I’m often asked if I miss working in social services. While there are aspects of those careers I cherished and loved, God has provided many ways for me to use those gifts and experiences at YOKE. I’m often able to provide counsel to students regarding challenges at home, at school, with peers, or just with life in general. My knowledge of child safety issues, abuse protocol, and resources available in the community often comes in handy. I also love the opportunities I get to counsel with our YOKE Folk on challenges they face, decisions they must make, and life goals they are setting. God never wastes anything!

It’s such a blessing to see how YOKE has grown over the years and I’m thankful for the opportunity to be a part of it. I must say though, I am THANKFUL for the decision to trade the mud slide in for YOKE’s messy wars. Flour bombs and water balloons are so much more forgiving than a huge pool of mud! 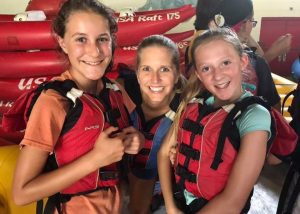 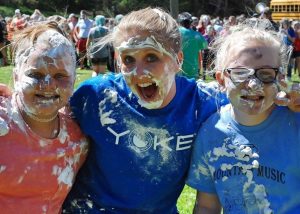 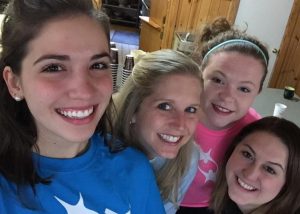