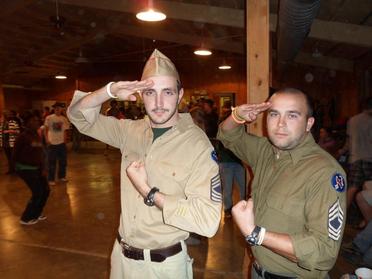 My YOKE story doesn’t go back as far as some. I remember attending club once in middle school but never became involved. It wasn’t until I was in college that I became engaged with YOKE. I was a junior preaching/youth ministry major at Johnson Bible College. Even as a youth ministry major I was wary of middle schoolers, maybe even a bit intimidated. But YOKE was a sure fire way to fulfill all of my necessary ministry hours to graduate, and I figured I’d have to become acclimated to middle school ministry at some point. Little did I know that God was beginning a work in my life that would eventually lead me to serve on staff with YOKE as the urban coordinator.

I became passionate about the ministry of YOKE when I came to understand the structure of discipleship that takes place from middle school all the way through college. On the surface YOKE can seem like an event driven ministry, something to keep the kids busy on Tuesday nights. After all, if I just participated in club I would have plenty of hours to fulfill my student ministry requirements for school. But my team leader at Powell—who just happened to be Stephanie Enger—would not let me settle for the minimum. The more time I invested the more I began to understand that YOKE goes way beyond club on Tuesday nights. I began to see the students open up and become more interactive as I was spending time with students outside of club. Amazing how that works, huh?

I remember the week before my first camp with YOKE. I was scared to death to spend the whole weekend locked in a cabin with middle school guys. I was dreading it. But camp was a turning point for me, because I saw how all the time I had invested in the students that semester leading up to camp came to a climax. Students began to ask questions about spirituality and open up about their own walk with Christ. I returned from that weekend with a new perspective on middle school ministry, and I knew that YOKE was doing it right. The more time I spent around YOKE, other YOKE Folk, and the YOKE staff, the more I understood that YOKE was a discipleship driven ministry.

I knew that I wanted to be involved with YOKE on some level as much as I possibly could for the rest of my life. Up until graduation that meant being a YOKE Folk, but only weeks after graduation I packed up and moved to the great city of Cleveland, Ohio, to work with a new church plant. Structured as an internship, I was scheduled to be there for a year, but gladly spent a year and a half in urban ministry in Cleveland. During this time I learned a great deal about ministry—especially urban children’s ministry. I also learned a great deal about myself—the most important being I am no church planter! I love the ministry of church planting and enjoyed my supporting role in the starting of a new church—but leading a church plant was not for me. So I made plans to come back to Knoxville at the end of 2013, without any idea of what was next. I was excited about becoming involved again in YOKE when I made it back, but through my church God opened doors to allow me to begin coordinating the urban clubs in Knoxville part-time. I’ve only served as a coordinator for a month now, but I am excited to see what doors God continues to open in my involvement with YOKE and in urban Knoxville.