The Secret to Growing Your Club 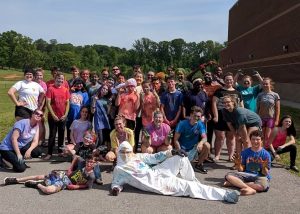 Jacob and Margaret Daniels grew up in Blount County and were high school sweethearts. Now, as a married couple, they enjoy serving together, both in the youth ministry of Marble Hill Baptist Church and for the last 8 years as YOKE team leaders at Union Grove Middle School.

Over the last couple of years, their YOKE club has averaged nearly 50 kids every week, but that has not always been the case. When they first began serving with YOKE, Jacob and Margaret were recruited to lead a team of seasoned YOKE Folk. “As new team leaders we learned from our YOKE Folk for most of our first year,” Margaret recalled. “We had a great team that helped us a lot as we were figuring out how to run a YOKE club.”

After that first year, Jacob got deployed, so the Daniels took a year off from YOKE. Actually, Union Grove took the year off, since no other leaders were identified. So, when Jacob and Margaret returned, they had to start again from scratch. Only 3 students showed up for their first club, but rather than get discouraged, they got to work.

Jacob and Margaret credit the growth of their club from 3 students to 50 students to a few factors.

To hear more of their YOKE story, you can listen to our conversation with Jacob and Margaret on our podcast, YOKE Talk. Be sure to subscribe to YOKE Talk on Apple Podcasts so that you can hear more stories from the people who are investing in middle school students through YOKE all throughout our community.