YOKE Runs in the Family 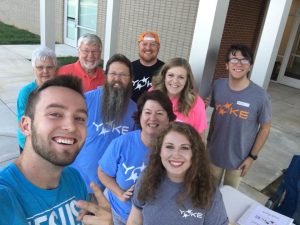 Roger and Dana White began serving as YOKE Folk not long after they were married in 1984. Though they were already active in their church’s youth ministry, they loved that YOKE’s school-based program was focused on middle school students.

“We started at Spring Hill Middle in 1986,” recalled Dana. “We moved to Halls Middle in 1991 where I served as a co-team leader until 1995 when our son, Eli was born.” (Disclaimer: Though our own Eli Cockrum was one of their YOKE Kids at Halls, Dana assured us that they did not, in fact, name their first child after him.) The Whites took a few years off from YOKE to raise their family, but once both their kids were school age, they came back to lead the team at Holston Middle. It was at Holston that the White’s got to see their own kids, Eli and Sarah, get involved.

“I had always heard stories from my parents about the adventures they had with YOKE, so it was always something I wanted to be a part of,” explained Sarah. “I was excited to go to middle school because YOKE was something I had been looking forward to for a long time.” Her favorite memory as a YOKE Kid involves a sleepover at the YOKE House. “Having college aged women that cared about me and desired to have a relationship with me was extremely comforting for an awkward middle school student.”

Dana has many memories from those days as well. One of her favorites is an opportunity that she had to lead a student to faith in Jesus. “One night in December, I was giving one of our girls a ride home after club when she asked me about the birth of Jesus,” recalled Dana. “She had never heard the Christmas story, so I as able to share with her in a way that I never had before, and she gave her life to Christ.” Dana said it really illustrated to her one of the principles that she learned from YOKE. “We should live our lives in such a way that people will want to know what is different about us,” explained Dana. “When they begin to ask those questions, we have earned the right to talk to them about Jesus.”

Roger and Dana have had the joy of watching both Eli and Sarah grow up to become YOKE Folk themselves, Sarah at Holston and Eli at Powell. “I wanted to become a YOKE Folk because of the impact my own YOKE Folk had on me,” explained Sarah. “What really attracted me was that those relationships didn’t end when I left middle school. I wanted to be able to help middle school girls just like I was helped. I wanted to be that trusted friend they could go to when they didn’t feel like they could go anywhere else.”

When asked how it felt to see their kids follow in their footsteps, Dana explained that it was both encouraging and humbling. “As a parent, you invest in your kids and try to lead them in the way of Jesus,” she said. “We did not do this perfectly, but to watch your kids live their lives for Him and choose to serve in a ministry that has meant so much to you is very humbling.”

In 2018, Roger and Dana once again answered a call from YOKE to help launch a club at the new Gibbs Middle School, this time with Sarah as a teammate. “Our community had waited a long time for a middle school, and we wanted to help get things off the ground so our community could enjoy the love and support YOKE offers to kids.”

The challenge afforded Sarah the opportunity to learn from her parents’ experience. “I have learned so much from serving in ministry with them,” said Sarah. “I’ve learned how to handle difficult situations with grace. I’ve learned how to speak truth to kids without invalidating their feelings or making them feel like they are being spoken down to. I’ve learned to lead a team with accountability and trust but also with freedom to try out new ideas and be heard.

Now the team leader at Gibbs, Sarah has begun building her own favorite memories. At YOKE camp last year, a young lady that she had been mentoring all through middle school pulled her aside and asked if they could talk. “As tears began to fall down her cheeks, she told me that she was ready to follow Jesus,” said Sarah. “After praying for her for three years, this was a moment that I’ll never forget.”

“We truly believe in the mission of YOKE,” concluded Dana. “Middle school is hard, but YOKE helped my kids during those tough years.  It makes my heart happy that as adults, they choose to try to serve others.”